Our feature this month, is Dave Kessler, who with wife Jeanne, own Sandusky Street Antiques, and sponsor the Best Of Show Pontiac award at the PCCS.

Their business was born in 2007, when Pilsner’s five and dime closed, Dave and Jeanne bought the building and opened Sandusky Street Antiques.

In addition to Classic Cars, Dave is an avid clock collector.

It all started in 1996 when I decided to get a classic car. I have always loved cars and
particularly GM cars. My clear favorites were Pontiacs. By the time I was 21 I had
owned 13 cars. I searched for months in 96 and 97 and finally found a classic Pontiac
for sale that hit all the important buttons. It was a coral and white Starchief Catalina 2
door hardtop with only 58,000 miles and I would be the fourth owner. The good news
was it was in Kalamazoo Michigan only 3 hours away. So in August of 1997 I drove up
to see and drive it. It was awesome! It originally sold in Iowa and obviously had 3 careful
owners over the years. The paint was a little weak but no rust. In the trunk was a spare
tire that had never been used.

So it was on….First new radial wide whites to make it safe to drive, curb feelers to
protect the WW and of course fuzzy dice. In 1999 it was a continental kit. Now it was
longer than any parking place in town. Next, in 2006 it was an engine rebuild with new
rings and bearings and other necessities like a 6 blade fan and fan shroud to cool the
big straight 8. Now the real fun started when a friend of mine who is a professional car
painter said he would do a frame on restoration with the modern paints and clear coat.
So in October of 2011 it went to his shop for 6 months. In the mean time while he was
sanding all the old paint off and painting I was getting chrome re-plated, buying NOS
bumper guards, having the stainless polished and purchasing other NOS accessories.
Lastly, in 2017 I broke down and had the front seat coral and white leather replaced and
added new coral carpet. The final touch was having the spacious trunk upholstered in
coral and white touched off with a small stainless framed sign with chrome “Starchief”
lettering and a Pontiac emblem all mounted on a black background that sets off the
upper level of the trunk. 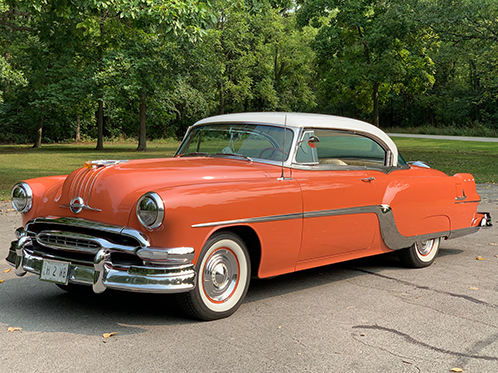 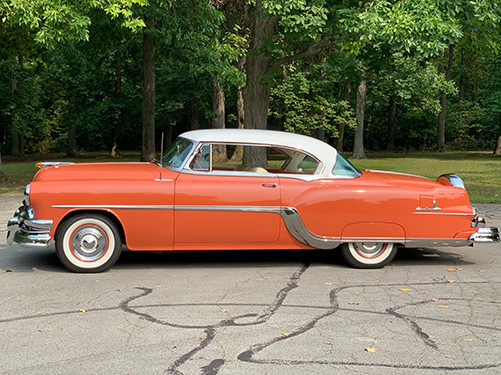